Bike Touring Italy: Everything You Need to Know for an Amazing Adventure

Is bicycle touring Italy right for you? Find out below!

If you’re thinking of bike touring Italy, we say an emphatic GO FOR IT! Italy offers twisting roads through peaceful countryside, marvellous frozen-in-time villages, and the world’s most perfect cycle touring food! Read on to find out if cycle touring Italy is right for you.

Having bike toured in 22 countries around the world, I can confidently say that bike touring Italy is superb!

We kicked off our cycle touring career on Italy’s west coast, just outside of Rome. From there, we wound our way up through the hill towns of Umbria, over the Apennines, and down through the Marches to the beautiful beaches on the east coast.

The day we arrived on Italy’s east coast – we had crossed an entire country!

We adored the rolling countryside, the frozen-in-time hill towns, and the friendly talkative people.

And the food. Oh the glorious food!

If you’re salivating at the thought of your Italian cycle tour, here’s…

Everything you Need to Know Before Bike Touring Italy

What’s in our guide to bike touring Italy?

Italy is a dream destination for hungry bike tourists. Heaping plates of pasta and perfect slices of pizza are on hand wherever and whenever you need them.

For vegans and vegetarians, it is easy to get fed, too. There are lots of traditional Italian recipes that don’t include meat or dairy. Learn the phrase “senza mozzarella” and you’re good to go! 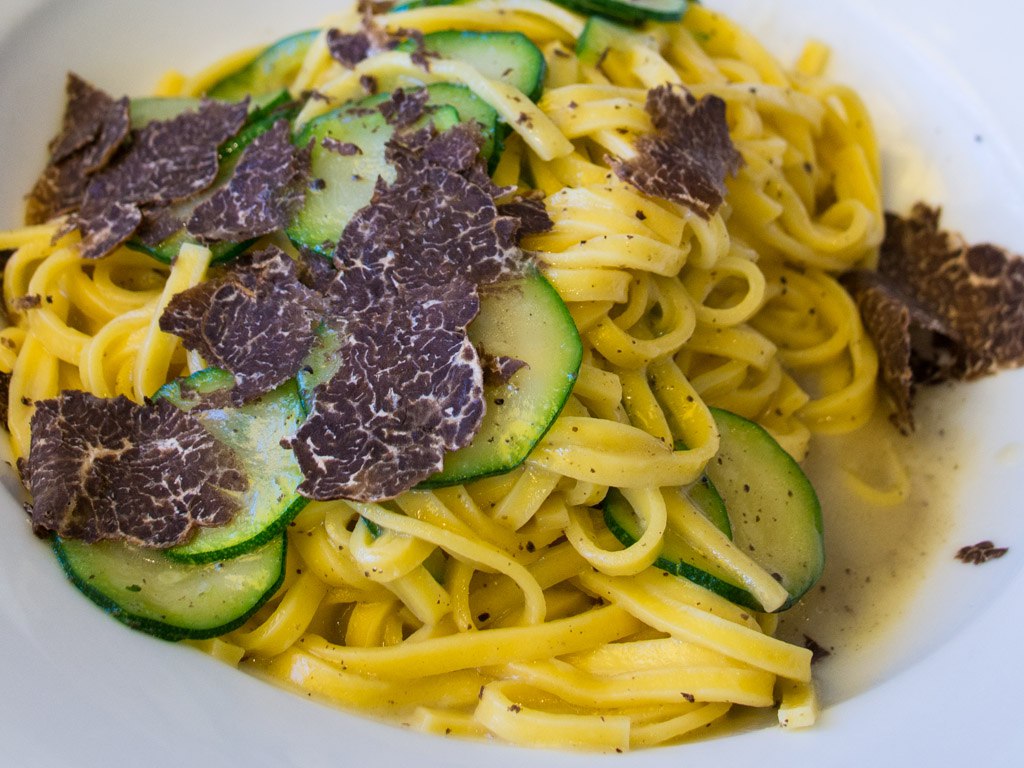 Stephen still dreams about this Zucchini e Tartufo over linguine in Gubbio, Italy.

Coffee and wine are both cheap and plentiful in Italy, so feel free to indulge (responsibly, of course)!

For us, Italian food and drink was definitely the big highlight of bicycle touring Italy!

Though wild camping is officially illegal in Italy, it’s not too hard to find a hidden olive grove or wooded spot to pitch your tent. If you’re on a budget, this is definitely your best option.

Our first, and possibly best, wild camp in Italy.

Campgrounds tend to be of the “camping resort” type, with swimming pools, restaurants, and supermarkets onsite. They cater to RVs but usually allow tents as well. Because of that, you’ll pay upwards of €20/night for a couple with a tent and two bikes. Also, campgrounds are usually only open in high season, so if you’re there in fall, winter, or early spring, it might be tough to find one.

B&Bs and Agriturismos are hard to find for less than €70 and many of those are closed in low season too!

We had horrible weather while we were in Italy — yes, it does rain there — so we ended up draining our budget on accommodation.

Check prices for B&Bs and hotels in Italy →

Italians have a well deserved reputation of being crazy drivers – and we found this to be totally true.

Usually, we stayed on side roads where there were very few cars, which allowed us to avoid the worst of it. But a few times we had to ride on the shoulders of busy roads and found that drivers had no respect (and sometimes downright animosity) for cyclists. Scary!

If you’re flying into Rome, we strongly advise taking the train out of the city like we did. 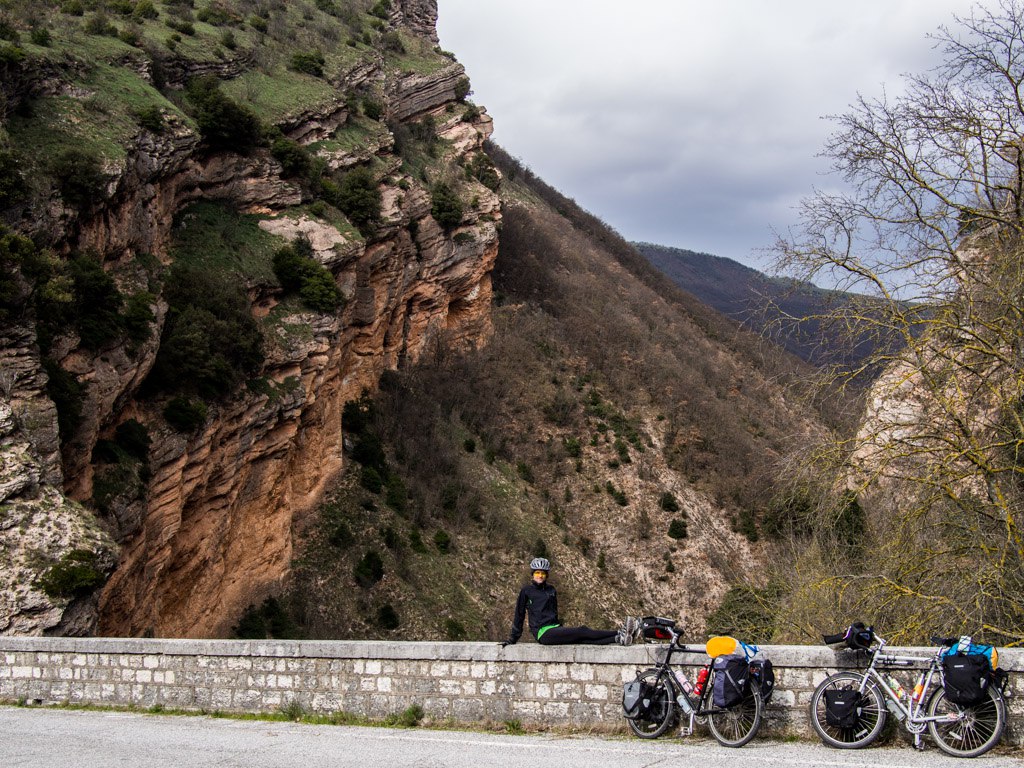 Italy has a few hills (and mountains). It’s hard to cycle tour Italy without climbing a few!

The other thing to watch out for in Italy is hills! If you don’t like hill climbing, don’t go bike touring in Italy!

Yes, we made the mistake of routing ourselves straight over the Apennines, but they are by no means the only crazy mountains and hills in the country. By the time you leave, you will definitely be in great shape!

Need some new bike touring gear? We use (and love!) these:

Dogs & Other Dangers in Italy

You will likely encounter a lot of aggressive barking in Italy — but mostly from dogs behind fences!

We only had one bad encounter with a dog in Italy. As we were cycling up a huge hill in Umbria, a dog came running out from its farm and snapped at Stephen’s foot. Eventually the owner came out and called his dog away — but he didn’t seem to bothered that his dog had attacked us!

In Italy, you should never leave your bikes unattended, since bike theft and petty theft are commonplace there. And watch your pockets in touristy areas like Rome and Venice! Pickpockets are still a major Italian menace.

Italy is definitely not cheap bike touring destination! Accommodation and restaurants are both relatively expensive in Italy. So if you’re on a budget, plan for lots of stealth camping and self-catering.

Staying in nice little guesthouses like this can really increase the cost of bike touring in Italy!

Bike touring is one of the cheapeast ways to see Italy though, so get out there on your bike and save your cash for food, wine, and fine art museums!

The Italian countryside is one of the highlights of bike touring Italy!

If you prefer to go on a supported bicycle tour of Italy, we recommend checking out these tours.

You start your 8-day cycling adventure in Florence (such a perfect city!) and finish in Pisa. In between, you will roll your way through the hills and olive groves of the Tuscan countryside, stopping in picturesque villages and to marvel at the mountain views.

After a long day of cycling, you have the perfect excuse to eat as much delicious Italian food as you can handle!

Get details of the Intrepid bike tour in Italy →

Cycling in Tuscany with G Adventures

If you prefer to set off from Rome, this 7-day Tuscany cycling tour with G Adventures might be right for you. On this tour, you stay in Chianco Terme and join in daily cycling trips to the hill towns, lakes, and spa towns nearby. Of course, you’ll get lots of opportunity to soak in the hot springs and eat amazing Italian food, too.

Get details of the G Adventures bicycle tour in Italy →

So, is bike touring Italy right for you? Are you planning a trip soon or just dreaming? Have you cycle toured in Italy before? Let us know in the comments!

Pin this for your Italian adventure!

In 2013, we sold all our stuff and set out to see the world. We now travel full-time, teaching Adventure Yoga and travel blogging.


If you want to travel more and more mindfully, you're in the right place!

Travel light to save money, avoid hassle, and have more great adventures! Use our guide to minimalist travel gear!