When I woke up this morning and unzipped the tent, this was my view.

Stephen on a dock somewhere in Finland.

Actually, I had woken up at 5:30am and the view was also spectacular. 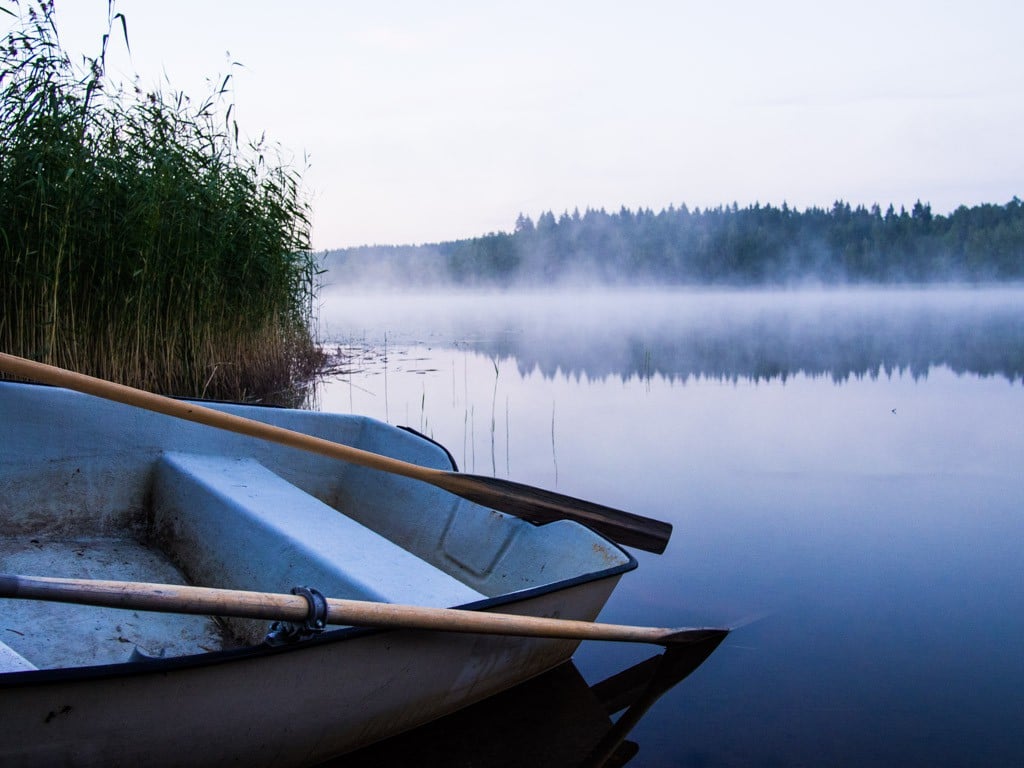 Luckily, the person who owns the cabin in front of which we camped did not arrive any time in the night, and so we had a private dock from which to swim, eat breakfast, and watch some very large birds that sounded like geese go by.

If this is your cabin, thanks for providing us a place to stay!

It was very hard to leave.

After 15 easy kilometres, we stopped in what we expected was the only decent place to shop all day. First, we wanted to find a cafe and use the internet. We found the perfect place in the Kimitoo library slash cafe slash tourist info centre. We spent far too much time there, since we’re way behind on our blog posts, and we think there probably won’t be any more internet for the next few days.

The thought had crossed our minds that now that Rome to Russia is done, we don’t need to post anymore. But never fear. We will persist. We’re hoping it pays off, though we’re not sure how that might manifest yet.

Then we shopped, buying supplies for two or three days of wild camping. This amount of supplies presents a major problem. Where do we put it all? Right now we have two small panniers and one 35L dry bag all dedicated to food storage. If you’re a touring cyclist, you’ll understand how excessive this is. We like to eat, what can I say?

Just as we were finishing up lunch in Kimitoo Park, and discussing how late it was and how much further we had to go today, a Finnish gentleman rode up to us on his bike.

“I’m Frank,” he said, and proceeded to ask us a few questions. “Oh, you’re just leaving? Too bad, I was hoping we could sit and talk.”

Of course we can sit and talk, Frank. This is one of the greatest parts of cycle touring. We sat back down and had a chat with Frank, who has lived a pretty full and extraordinary life thus far, it seems. Over our ten-minute chat, subjects ranged from the Irish band he plays in, to his days as a jazz dancer, to oil in Norway, to Jelly Roll Morton. Finally, I put the chat to an end, since I knew those 65 remaining kilometres weren’t going to pedal themselves.

Stephen’s note: Frank also told us about the water in the Baltic countries. It’s probably an urban myth, but he told us the water table is terrible there because during the Soviet era pilots were stationed in the Baltics. Their job was to fly the skies, and look for invaders. However, they would rather drink vodka than fly. So, they would land their airships in a field somewhere and drink the day, or night, away. When it was time to return to base they couldn’t return with a full tank, so they dumped the kerosene into the ground, thus ruining the water table for generations to come.

Frank seemed sad that we were leaving, and I was sad not to have longer to talk, but sometimes you have to let things go to keep working towards your goals.

The riding today was spectacular. The roads were fast and a little hilly, but surrounded by gorgeous golden fields of wheat dotted with deep red barns. It’s like the Finns found the perfect paint colour for a barn, and then they threw away all the other paint. After all, once you’ve reached perfection, why would you want anything else?

Much of the route took us on a wide paved bike path, set off from the main road by a grassy median. Everything, even harsh sea wind, seems a little better when you’re on a bike path.

After almost 80 km, we finally reached the Finnish Archipelago, our goal for the day.

On the bridge to the Finnish Archipelago.

We turned off the main road to search for a place to camp. Tonight it was a little harder to find a spot. The shoreline in this area is mostly wild, reedy marsh, so you can’t just ride up to the shore and set up a tent. You have to find an access spot, where there is a little clear space.

The first place we tried looked perfect, but then it turned out to be a private dock. Some kids on jet skis were there, but the owner wasn’t, so there was no way to ask permission.

The next spot, a little further along a dirt road, was pretty good. A hidden dock, with an expensive motor boat at it that looked like it hadn’t been used in a while. Probably private too, but there was little chance of anyone showing up tonight. The only drawback? The water was too fuggy to swim in.

I managed to convince Stephen that there was a better place waiting for us, so, following some vague information on the tourist map we’d picked up earlier, we set out in search of a public beach. It was good 4 km of hills until we came to the place where the beach should be. But it wasn’t there.

“Uh-oh,” I thought, “Stephen is going to be really annoyed with me.” We rode along a little further, crossing a small bridge and looking back at the shore.

I followed him, but our first attempt led us down a path that ended in some old rotting cottages and nothing else. I had seen another road a little ways back that seemed promising, so we backtracked and followed that.

If at first you don’t succeed… persistence pays off.

As soon as we arrived, we changed into our swimming suits (this beach is a little too public for skinny dipping) and wimpily made our way into the water. Stephen used to be the guy that would jump into a glacial pond in Norway without a second thought, but no more. I wonder what has happened?

Stephen’s note: I have always been a wimp when it comes to jumping in not-quite-freezing water. Just ask my sister or parents who have waited and waited for me at the cottage, sure I would never go in. But in early spring, or in a Nordic glacial pond when it is freezing no matter how slowly you go in, I love to just jump in and shock the system back to life. So good for you!

We finally made it in and the water was just fine. It’s the Baltic Sea here, so a little salty, but not overly so, and we still felt clean when we got out.

As we made dinner and set up camp, a few people drove down, parked, jumped in the water for a few minutes, and then drove away, just like two nights ago.

The last people at the dock, fishing into the dark, Finnish Archipelago.

We love that even though not everyone can afford a waterfront property, there’s still a place for them to take a swim after dinner.  ♥