Articles from this Tag

Here it comes. The Hungary vs Poland International Smackdown. I don’t know about Europeans, but I would hazard a guess that most North Americans think of Poland or Hungary (if they think of them at all) as nothing more distinct than biggish countries somewhere east of Germany. Stephen and I had very little idea of […]

2424 km so far. We got up bright and early today hoping to catch the 8:35 ferry across the Danube. When we pulled up to the ‘dock’ (which is actually just the road running into the river) and bought tickets, we noticed the ferry was already pulling out, although it wasn’t quite 8:30 yet. The […]

2364 km so far. When we woke up this morning, the rain had stopped, but there was no sign the sun was ever going to come out. We packed up quickly, but by the time we’d got the soaking tent stored away, the rain had started again. We ate our breakfast of muesli and soy […]

2338 km so far. We were seriously slow this morning after a slighty drunken return to the apartment last night at 3:30am. I’m kind of glad we’re leaving today as I can’t handle this big city pace any longer! Our groggy haze, combined with the disorganisation that comes from not going anywhere for four days, […]

2310 km so far. Hungary’s history during the twentieth century is quite incredible. Empire building followed by great loss of land and power in WWI, a brief period of democracy, a Nazi takeover, a fight for freedom, Soviet occupation, a period of brutality, a revolution that was crushed, followed by “happy communism”. Finally, in 1990, […]

2307 km so far. This morning we got up and went straight to the bike shop. Since failing with three shops on Saturday, Stephen had done some more research and found a shop online that sounded like the real deal: a place where they care about bikes and bicycling and really know their stuff. With […]

2283 km so far. We took full advantage of Barbi and David’s flat today. Jane slept in while I caught up with friends on Facebook and read the news. We then had an easy morning as we stayed in, catching up on emails, blog posts, photo editing, and coffee drinking. It was so great to […]

2283 km so far. Today we celebrated 2 months on the road!! We are in Budapest, staying with our new friends David and Barbi in their lovely flat. It is so nice to feel “at home” somewhere for a few days. It’s also incredibly nice of two complete strangers to take us in for 5 […]

2283 km so far. We woke up alone on the lake, to the sound of ducks, frogs, and a bird that seemed to be singing the Mission Impossible theme. It was lucky that as we were approaching the campground last night we met a Dutch couple coming off the EuroVelo 6 where we were to […]

2222 km so far! Last night we wrestled with the decision of whether to stay another night and meet the family whose home we’d been enjoying, or move on towards Budapest. Thinking that we’d probably be an inconvenience to a family who’d just arrived home from we-don’t-know-where, we decided to move on. But not before […] 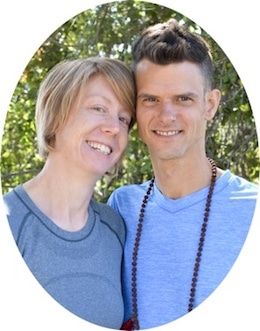 Four years ago, we quit our jobs, sold our house and traded our cars for two bicycles. We spent two years cycling touring more than 16,000 km in 22 countries.


We now travel full-time, teaching yoga and sharing our passion for adventure on My Five Acres.


If you want to find the courage to live a life that truly makes your heart beat faster, we'll help you get there!